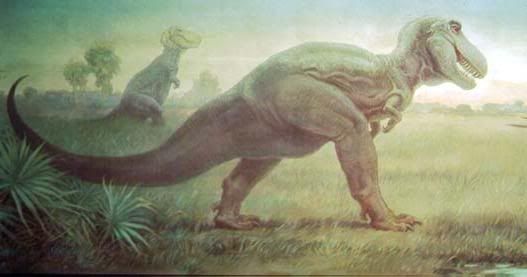 Routinely looks into the threatening orange eye of a Tyrannosaurus rex. She checks the old hunter’s knife like teeth and reviews his grayish scales.

As the Peabody Museum of Natural History goes through a full-building redesign, the conservator has been accused of watching out for “The Age of Reptiles,” the cherished, all encompassing painting portraying 319 million years of plant and creature development extended across the east mass of the historical center’s dinosaur corridor.

They orders the left half of the rambling scene, which includes a top pick cast of dinosaur species. They should guarantee the ancient monsters, and the rich, dynamic scene encompassing them, rise out of the redesign flawless. It’s a difficult task. At 110 feet in length and 16 feet high, the wall painting is one of the world’s biggest compositions.

“I basically need to memorize every inch of it,” they said. “That way, I can spot any changes.”

The nearby viewpoint uncovers subtleties that are troublesome, if certainly feasible, to appreciate from the floor.

On a new evening, a senior teacher for state funded training at the gallery, remained on the base level of framework which presently encases the wall painting. He absorbed the scene on the correct edge of the wall painting, which portrays the late Devonian Period the artwork’s soonest vignette.

He highlighted the hazy blueprint of a fish swimming under shining water close to the painting’s base edge.

“You’re looking down on the plants and animals in the bottom third, on level with them in the middle third, and from below them in the top third,” he said, pointing out how the viewer sees the underside of the leaves above and the backs of the beasts below. “You lose that perspective from the hall’s floor.”

In the last year of a five-year program, he had contemplated Medieval and Renaissance craftsmanship, including Italian frescoes. The yawning scope of clear divider roused him to paint a solitary painting rather than a few more modest compositions, Morgan said.

“He didn’t want to break up the space,” he explained.

As the youthful craftsman worked away, the divider’s block face was covered with steel slat and mortar. When the mortar dried, they started moving the sythesis from the egg-gum based paint painting to the divider.

“The mural had a gigantic impact,” they said. “It shaped the way people imagined dinosaurs for generations.”

Setting up the painting for new ages

While the painting’s depiction of dinosaurs and vegetation is deductively obsolete, the painting stays a spellbinding masterpiece that catches individuals’ comprehension of dinosaurs during the 1940s, they said, and should be deliberately protected.

“It will be cleaned and conserved again for exhibition before the museum reopens,” she said.